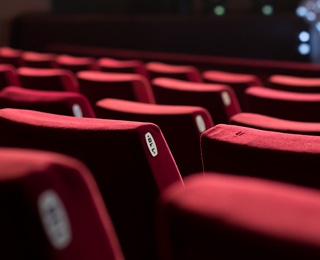 A favorite pastime for many Americans is going to see a play. Whether comedy, tragedy, historical, or musical, attending a live drama performance is sure to evoke emotion and linger in your thoughts. It’s unlike any other form of entertainment. The playwright creates a reenactment of real-life situations, or perhaps fantasies, that motivate us to think critically about our own lives and choices. Fortunately, residents of The Admiral at the Lake have a broad spectrum from which to choose without having to venture far from home. The following theaters are but a few of the many options available:

Every year, the Raven presents a wide range of high-quality modern dramas, theater educational programs, and special events. As a professional, ensemble-based live theater company, the Raven seeks to serve the community’s needs through the arts while providing a welcoming atmosphere for artists to showcase their skills.

Since settling into the Bryn Mawr Historic District of Edgewater in 2002, the Redtwist Theatre’s productions have received 50 Jeff nominations and won 9 Jeff Awards (Chicago’s theater awards). It first began in 1994 as the Actors Workshop Theatre, and adopted the name Redtwist Theatre in 2008. From the beginning, it has consistently produced critically-acclaimed dramas while offering acting classes to beginners and professionals.

Dedicated to the vitality and accessibility of the literary imagination, City Lit has been producing quality, witty theater since it was founded in 1979. Best known for pioneering adaptations of classic and contemporary literature, City Lit explores the writing of classic and contemporary writers through fiction, non-fiction, biography, essays, and drama. The City Lit is a 501(c)3 not-for-profit and has received 37 Jeff nominations and won 18 Jeff Awards.

At the City Lit

Bringing ‘every man’ theater to the stage since 2000, Steep Theater ensembles seek to reach beyond the typical theater audiences with relevant modern dramas that bring out the everyday truths of ordinary people in extraordinary situations. Pushing artistic boundaries from the foundation of traditional and contemporary theatrical tradition, Steep ensembles hit home.

The Goodman is committed to producing both classic and contemporary works, giving full voice to a wide range of artists and visions. Established in 1925, Chicago’s oldest and largest not-for-profit theater is well known for the quality of its productions, artistic leadership, and the educational community programs it provides.

Introspection in Its Purest Form

One of the most provocative forms of entertainment, a night at the theater is time well spent. Each of these theaters is run by artists who have dedicated themselves to the art of theater. Their entire life’s work unfolds before you with the hope that you will not simply go home and return to your normal life, but be motivated to take a second look at your role in your own happiness, your responsibility to the people around you, to your country, and humankind.

And, every one of them is easily accessible from The Admiral at the Lake, a continuing care community dedicated to supporting the personal independence, health and wellness of members. We avoid the term senior retirement community, because residents of The Admiral at the Lake are anything but retiring. They’re Chicago’s movers and shakers, working to make Chicago and the world better. To learn more, call 773.433.1801 or click here.