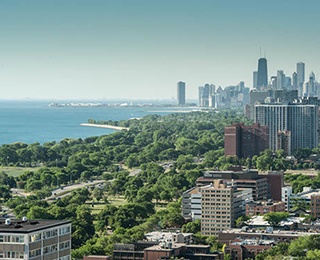 As you may already know, Chicago is known to have a little bit of something for everyone. There is a lot of history, culture and art to explore throughout the city. And if you like the city life as well as nature, Chicago neighbors Lake Michigan and offers plenty of beaches and trails to fulfill both interests.

It’s one of Joan’s favorite aspects of life in Chicago. Joan shares with us her Chicago experience.

From the East Coast to the Midwest

Joan, an Admiral at the Lake resident, grew up on the East Coast in New Jersey and New York suburbs. She came to the Midwest as a bride and lived in various Chicago suburbs with her family.

During her time in Chicago, she was a stay-at-home mother and raised her children. Once her children had grown, she studied and got an MBA and CPA and got into non-profit financial management and administrative executive management.

Once she retired, she and her husband moved into a retirement community in a small town in Indiana, before eventually deciding to return to Chicago at The Admiral at the Lake.

One of Joan’s favorite things about Chicago is not only having easy access to the city but nature as well.

“My husband and I are both physically mobile and agile enough. We still enjoy walking and biking with our dog Spice [named after the Kendal Quaker Values],” Joan explained.

“Within 400 feet of our front door [at The Admiral at the Lake], we can be at the beach, on a bike path or on any of the vast network of trails. We can have the best of the city and nature at our doorstep.”

Lake Shore Drive in Chicago is widely acknowledged to be one of the prettiest extended stretches of urban parkway in America. This over 15-mile stretch features the tall skyscrapers and city to the west, and the beautiful natural scenes of green parks and beaches to the east. Some well-known attractions of Lake Shore Drive include Navy Pier, Soldier Field and the Lakefront Trail.

“Chicago has diversity and easy opportunity at your fingertips,” Joan explained. “Chicago has energy and the creativity in so many facets of life, from urban planning trying to reinvent the lakefront and make it habitable and acceptable for the next 100 years, to theatre and art. I can’t imagine a more creative theatre scene than Chicago.”

One particular type of theatre that Joan enjoys is black box theater. Here you can be creative on how your stage and audience seating are configured. These are small, indoor spaces with plain black walls and a level floor.

“It’s great that small theater can survive and thrive, and people can express their skills, talents and passions both as avocations and as professions.”

Joan went on to say,“The outlets to be a spectator of culture are superb and affordable. You also have opportunities to participate in those passions. Our neighborhood is uniquely rich in cultural diversity.”

Joan also pointed out the culinary creativity of Chicago.

Moving to The Admiral at the Lake

“Kendal announced that it was partnering with The Admiral. The Admiral puts a focus on beauty of sight, culture, city, adulthood of healthcare, and family and friends. We have relatives and friends here. So at that point, it would be silly to go elsewhere,” Joan explained.

Joan has happily lived at The Admiral for close to six years.

When asked what advice she would give to someone considering The Admiral, Joan said, “Think of the totality of what you gain when you move to a community that is consciously diverse — economically and culturally — and located amid beauty. The location of The Admiral gives you terrific access to the best of the city!”

Make The Admiral at the Lake Your New Home