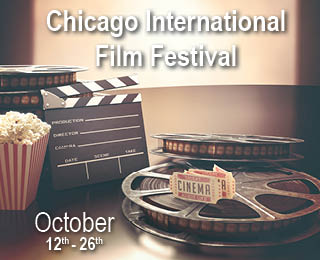 “Film as dream, film as music. No art passes our conscience in the way film does, and goes directly to our feelings, deep down into the dark rooms of our souls.”

The Chicago International Film Festival, October 12-26, strives to be everything to all people…well, people who love film. The festival offers programs that showcase formats and genres as diverse as documentary, short films, “After Dark” (horror, dark comedies, thrillers), LGBTQ themes, and black culture, as well as filmmakers who are female, black, or LGBTQ or from the Americas, Illinois, and, of course, the world. Frequently, the festival is the film’s U.S. premiere, and it is introduced by the cast, director or producer.

More than Screenings at the Film Festival

Although film is the topic, numerous related activities are available during the event and after screenings, such as panels, educational events, and question-and-answer sessions. You can attend the pre-film reception and film presentation on opening night. Tributes to industry greats occur at the AMC River East, 322 E. Illinois St., on various dates during the festival.

End the festival with a final film and a party during the closing night party, which also includes cocktails and hors d’oeuvres.

As any film-lover will tell you, there’s an art and science to viewing films amidst the abundance of a festival. Here are 10 tips from aficionados:

Explore Your Creativity at The Admiral at the Lake

Admiral residents admire creativity and enjoy opportunities to explore their own creative talents in group activities created for and by the residents themselves, many of whom are artists. Our halls are lined with artworks created by residents.