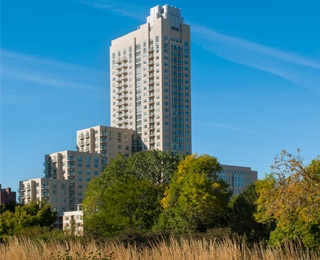 “She is novelty; for she is never the Chicago you saw when you passed through the last time.”

Granted, Twain (Samuel Clemens) visited the town during the late 19th century when it was being built and rebuilt (after the Great Chicago Fire) as the nation’s Midwest hub, but Chicago continues to change to meet the demands of today and tomorrow.

Living in an urban environment has many advantages for residents, no matter what age, social status, career or income level. Benefits common to many metropolitan areas include:

Chicago, though, is…indescribably unique. Even though the sprawling metropolis is home to more than 3 million people, it’s made up of small communities, each with its own unique flavor.

For the neighborhoods around The Admiral at the Lake, few can match the history and knowledge of Joyce Dugan, longtime resident of Uptown, former CEO of Uptown United, and a current homeless and mental health advocate. She’s chairperson emeritus of Community Counseling Centers Of Chicago, Inc. and a former board member of Sarah’s Circle, “a refuge for women who are homeless or in need of a safe space.”

She chose to live at The Admiral at the Lake because it is so close to the north side of Chicago, where her heart lies.

Joyce says there’s always something to do in Chicago. To prove it, she’s listed some of the most interesting places and activities on the north side of the city.

The Music Box is known for its presentation of independent, foreign and cult films, as well as films of theatrical productions. Each summer, the theater screens favorites as part of The Park at Wrigley’s free summer movies. For some cult classics, such as The Rocky Horror Picture Show, attendees dress up as characters in the film. In December is the venue’s famed Christmas Show, featuring a sing-along with the organist of the season’s most popular carols, followed by a Christmas movie classic. The preshow slideshow features pictures from locals who’ve attended past screenings, so everyone can participate.

Fall and spring are the times to catch migrating birds, who stop over to rest and eat, earning an area on the west side the name, “Magic Hedge”. No matter what the season, you can participate in biking, running, trails and golfing.

Founded in 1868, Lincoln Park Zoo is not only one of the oldest zoos in North America, it is one of the few free ones. Whether you prefer the zoo’s newest inhabitants—African spotted dogs, crowned lemur, and Baer’s pochards—or old favorites—Amur tiger, Japanese Macaques, and the West African Gaboon viper—there’s plenty to see at the Lincoln Park Zoo.

With an expansive drink menu, delicious food, and entertainment that features top-of-the-genre drag shows, Kit Kat offers plenty of reasons to stop in. Don’t miss Sunday brunch with the drag show! “It’s more fun than a barrel of monkeys to go there. They have great food, too,” remarks Joyce.

You may visit Uptown Underground because of rumors it was once operated by Al Capone, but you’ll come back again and again for the club’s cabaret, burlesque, magic, vaudeville, and variety entertainers. Self-described as “top-shelf retrotainment”, the club is one-of-a-kind. It’s home to “The Kiss Kiss Cabaret”, named the city’s best burlesque troupe. And the magic shows are interactive and out of the ordinary.

For those of you who think of symphonies as groups of stodgy musicians playing centuries-old instrumentals, meet the Chicago Symphony Orchestra.

The CSO is not only a world-class orchestra, it attracts the highest caliber of performers and composers.

The Aragon is one of the few venues that’s managed to make the transition from its early 20th-century construction to host modern concerts successfully. The crystal chandeliers, mosaic tiles, beautiful arches, extravagant balconies and terracotta ceilings add to the experience.

#8 Midnight Circus in the Parks

From August through October, as part of the Chicago Parks District’s “Night Out in the Parks”, many of the city’s parks host a real-live circus, with acrobats, trapeze artists, and clowns. And the only animal act features the bully breeds, those that disproportionately fill local animal shelters. Every performance benefits the city’s parks, and Midnight Circus has raised well over $800,000 so far.

The Chicago Park District offers so much for residents, it’s no wonder few leave. From fitness, art, and dance classes to music and theatrical events to dog parks and trail walks to nature sanctuaries and more, we can’t conceive of a park district that provides such variety for so many people (of course, we are partial).

Plenty to Do Near The Admiral at the Lake

Right here in our own neighborhood, we have a wide selection of activities to enjoy. From live music to outstanding theater to bird-watching, residents of The Admiral at the Lake embrace the vibrant diversity of Chicago’s north side. Catch our monthly round-up of some of the best local events at the end of each month.

Our continuing care community promotes personal independence, health and wellness for our residents. Are you looking for a senior living community for yourself or a loved one? Call The Admiral at the Lake at 773.433.1801 or click today to get your free, no-obligation information kit.