Chicagoans love their city. Should you move out of Chicago just because you’re getting a little older? 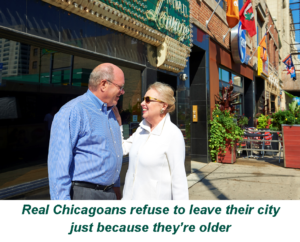 The Admiral at the Lake residents Bill Hinchliff and Joyce Dugan would answer, “Absolutely not!”

Bill’s lived in the Chicago area all his life, barring time spent in the Air Force, college, and grad school. While serving as a teacher, he became intrigued by the city’s history and architecture, which led him to become a Chicago tour guide.

Joyce, a longtime Chicago resident, proudly claims Uptown as her former neighborhood. A former city worker who has also worked in
community development at Uptown United,
she now volunteers with area organizations.

In no particular order, Bill mentions Edgewater/Andersonville, the Loop, South Loop, Near North, Lincoln Park, and Hyde Park as the best neighborhoods for older adults in Chicago.

“I can’t single only one out,” he explains.

Joyce says that all the lakefront neighborhoods, from Brownsville north, offer the public transportation that is a necessity for older Chicagoans.

Criteria for selecting the best Chicago neighborhood for older adults

Bill embraced the following criteria for his choices for best neighborhoods for older adults:

Joyce’s list is a bit more prioritized. For her, the best older adult neighborhoods must include, in order of priority:

Asked why he chose to move to the Edgewater/Andersonville area, where The Admiral at the Lake is located, Bill responds:

“I was delighted to be so close to Edgewater and within walking distance of its loveliest residential blocks and its most vibrant commercial street. However, before too long, I found myself taken with other areas nearby, because of the large South Asian presence featuring Vietnamese, Cambodia, Thai and Laotian restaurants, shops, and markets, as well as the rich history, old theaters, ballrooms, and variety of architecture.”

Joyce calls the neighborhood near The Admiral “the safest police district in the city.” Drawing from her experience as a former city worker, she maintains that “crime statistics are very subjective. They classify crime in a lot of ways that people don’t take the time to understand or which may be misleading.” For her, the real draw was being able to stay close to her friends and neighbors, quite a few of whom have moved to The Admiral at the Lake.

Highlights of the neighborhood

Local attractions are cited by both Bill and Joyce as reasons they enjoy living at The Admiral at the Lake:

Another attraction for many neighborhood residents is Lake Michigan. “In Chicago, being close to the lake is a great draw,” Bill remarks.

Neighborhood attractions near The Admiral at the Lake

Other nearby attractions include:

The Admiral at the Lake’s location at West Foster Avenue and Marine Drive receives a “Very Walkable” score of 72, an “Excellent Transit” score of 75, and a “Very Bikeable” score of 87 from Walk Score.

While Bill doesn’t expect the area to become “an enclave of upscale senior citizens” any time soon, he enjoys walking, shopping, dining, and living in the area.

Joyce, on the other hand, couldn’t conceive of living anywhere else.

Community is just one of the five SPICE principles that govern the lives of people all around the world, as well as at The Admiral at the Lake. Learn more about how SPICE can help you lead a fulfilling life.